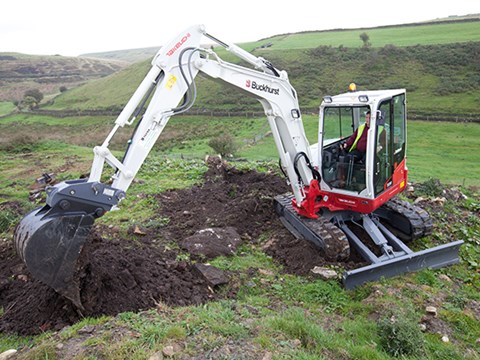 The Takeuchi TB260 excavator being tested by Geoff Ashcroft. 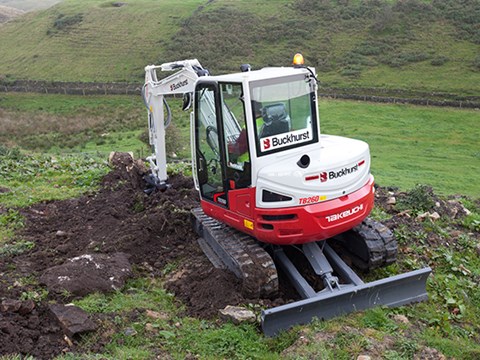 The TB260 was created to bridge the gap between Takeuchi's TB250 and TB285 excavators. 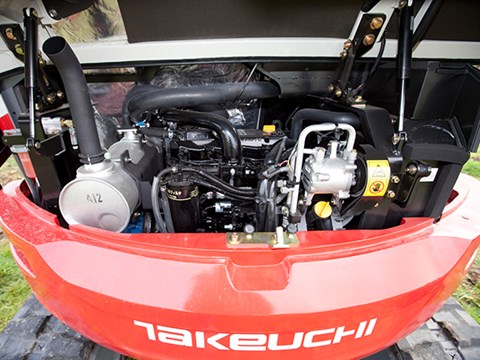 The TB260 offers an impressive level of access to its major components and also the cooling pack. 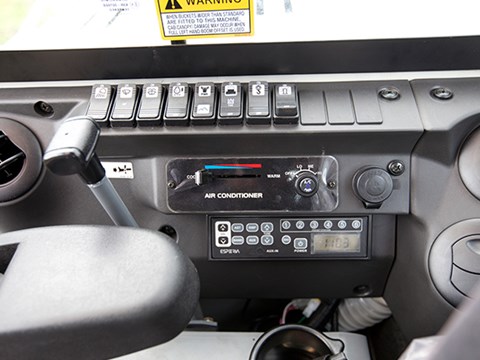 The excavator's air conditioning system is a throw-back to the dark ages. 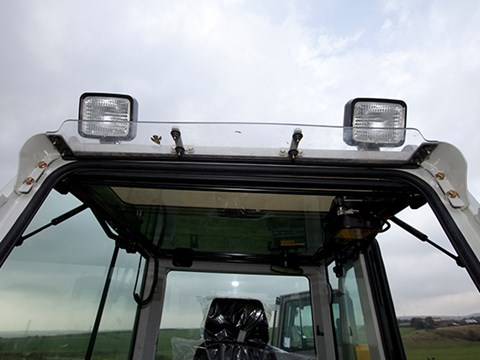 The two work lights are an example of Takeuchi’s newfound eye for detail.

With an operating weight of six tonnes, the TB260 excavator represents an all-new model for Takeuchi, slotting into the range between the TB250 and TB285. GEOFF ASHCROFT takes it for a spin.

You could be forgiven for thinking that Takeuchi’s new TB260 is a fattened up TB250 or perhaps a slimmed down TB285.

Well, it’s neither. The Japanese maker went back to the drawing board to fill a void that was created by the arrival of its 8.5-tonne TB285.

It may be recalled that the TB285 replaced the TB175 and, in doing so, put on a little weight. It also helped to distance it from the five-tonner. But the resulting 2.5-tonne gap was considered just too wide to be covered by both models, and so the TB260 was created to bridge that gap.

Was it necessary? The firm says there is currently a waiting list for 260s, such is the demand for the new model.

At 5,720kg with a full tank of fuel and a bucket, the TB260 doesn’t get a tilting cab, and a look under the right-hand side canopy reveals it’s just not necessary. Opened up, the right-hand-side cover lets you gain easy access to the main hydraulic valve chest, hydraulic tank and system, leaving plenty of space on the front corner to stow a grease gun and even a chain.

Cleverly, the battery is covered with a clear plastic sheet, avoiding any embarrassment should something metallic slip through fingers and attempt to make contact with the battery terminals.

There is a removable access panel bolted into the back of the cab, which is essential to gain access to the dark side of the engine.

With the engine canopy opened too, the TB260 offers an impressive level of access to its major components and also the cooling pack. A swing-out condenser for the standard-fit air conditioning that sits in front of the radiators lets you get into the cooling cores for engine coolant and hydraulic oil cooler — both elements stand shoulder to shoulder.

Any over-heating on this model would no doubt be down to poor maintenance and a lack of regular checking.

The excavator’s components have been packaged very cleverly, making life very easy for operators - daily checks and maintenance can be carried out easily from ground level, instead of having to climb onto the machine.

With the two panels opened and stood alongside the TB260, it is easy to see coolant and hydraulic oil levels. The air filter is easily accessed too, as are fuel and oil filters and the engine’s dipstick.

The Yanmar turbocharged two-litre four pot engine does look lost in the back of the TB260, but what it lacks in stature it more than makes up for with its performance. The 45hp (33.6kW) engine gets an electric throttle control which allows you to dial up any combination of revs, noise and fuel consumption, to suit.

Underpinning the TB260 is a fixed undercarriage that offers five lower and one upper roller, all triple-flanged with maintenance free bearings. The 400mm rubber tracks can be replaced by steel options, maintaining its 2m wide, 2.75m long footprint.

Two-speed tracking — now with the travel speed control on the back of the right-hand joystick — offers auto kickdown when dozing, allowing you to make full use of the 430mm high blade.

A generous blade frame keeps the cutting edge away from the machine, helping to make cleaning up against the blade an easy affair.

It seems the TB260 is clearly built with the end-user in mind. Flat glass is used throughout the cab, there is a cast wrap-around counterweight that does its best to offer a high level of protection for the short tail-swing and there are steel panels used throughout.

It should handle a few knocks without breaking the bank but, equally as important, it now looks the part. This is a neatly styled excavator that no longer looks old fashioned and out-dated. It is fair to suggest that this model is perhaps the most up-to-date of any Takeuchi currently available.

Examples of Takeuchi’s attention to detail are flagged up everywhere you look. For example, much of the TB’s low-pressure pipework gets two jubilee clips instead of the usual one, to secure each hose end to its male counterpart.

Then there is the built-in refuelling pump with auto shut-off, which tucks neatly into the skirt below the cab door. Okay, it’s hardly rocket science, but for those using gravity fill systems, Takeuchi has gone to great lengths to make it easy to refuel, regardless of which method you choose.

There is now a secondary mechanical fuel gauge which sits on top of the fuel tank and is easily visible alongside the tank’s filler neck. So there is no need to keep getting in and out of the cab to check the gauge. It gets my vote and is far better than using a red float in a sight tube that will quickly discolour to match the fuel being burnt.

Two work lights on top of the cab roof instead of one, and a rain guard for those who like their front screen stowed in the roof, are further examples of Takeuchi’s newfound eye for detail.

And it is easy to lift the front screen. Gas struts on either side of the frame make it a smooth, simple lift, and there is enough headroom inside the cab to avoid scalping yourself when raising or lowering the screen. If you want the lower glass panel out, it stows against the left-hand side window like other Takeuchis.

Up front, the TB260 gets a one-piece boom and long arm configuration that affords a maximum dig depth of 3.89m and a maximum reach at ground of 6.13m.

Boom offset delivers 78 degrees of movement to the left, and 55 degrees to the right. And with the firm’s traditional multiple hydraulic pump approach, you can be sure that this one will continue to perform.

In the cab department, Takeuchi has continued to pull out all the stops. This latest work station is exceptionally roomy and offers great visibility around the machine. Like that fitted to the TB285, it is one of the best cabs that Takeuchi has to offer, and there is storage space available behind the seat.

Cabs on this size of machine are often criticised for their lack of room and cramped seating position, but if you can’t get the seat and controls just where you want them, then there’s little else for you but a spade.

Personally, I would like to see a little more boot room, and on more than one occasion, my toes kicked the lower front screen while using my feet on the pedals to track forward.

That said, it was the only area of concern during my time in the cab. Fore and aft sliding side windows offer additional ventilation and, when the entire cab is buttoned up tight, noise levels are acceptable.

The high-back suspension seat offers plenty of moves to get the relationship between body and joysticks just-so. Wrist rests are adjustable, and proportional thumb controls sit on top of the joysticks for easy manipulation of auxiliary functions. This model gets two lines as standard, and the main auxiliary line is adjustable with different flow rates able to be stored through the in-cab control panel.

All switchgear and additional controls are easy to reach on the right-hand side of the cab, and the two-speed tracking button is now on the back face of the right-hand joystick, making it easy to toggle using your index finger. In its higher speed, a green illuminated hare appears on the dashboard. But being an auto-kickdown system, it is a choose-and-forget system.

For all its modernity inside the cab, the air conditioning system is something of a throw-back to the dark ages when it comes to temperature adjustment. A slider with cable operation means you choose from one of two temperatures — hot or cold.

There are lots of vents around the cab, making it easy to heat or cool the interior, without giving yourself localised burns from a ventilation outlet.

Getting any temperature in between Antarctic and Sahara settings requires a level of skill and patience more often found among bomb disposal engineers. And this is an area where the TB260 really needs the larger TB285’s more user-friendly climate control panel. 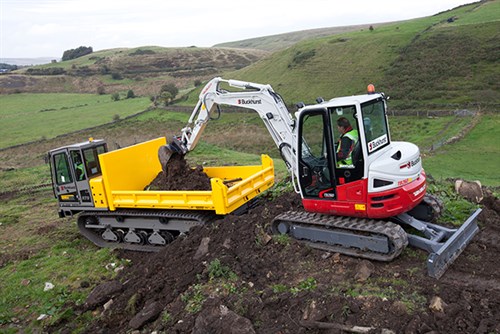 Machine information is presented on a colour graphic which forms the basis of the TB260’s monitor. It offers more visual appeal than that used in the TB285, though it allows you to see temperature, fuel level and revs. The latter are shown using a coloured bar graph that starts in green and ends abruptly in red.

The electronic throttle won’t let you set the TB260 to run in the red, and that’s for a very good reason other than encouraging the early onset of premature engine failure.

Dialling in full throttle using the rotary control lets the two-litre four pot spin at 2,400 rpm. Yet there really is no need for all the revs all the time. This excavator performs admirably at half- to three-quarter revs, offering plenty of muscle and a reasonable turn of speed in all departments save for the slew.

At anything less than ten tenths, the TB260 slews in a leisurely fashion, offering the chance to reward with more fuel efficiency when you don’t need to draw on all that the TB260 has to offer.

A three-position rocker switch lets you toggle between Power, Standard and Altitude modes too. Although the latter might be better suited to Himalayan contractors, Takeuchi says it maintains engine performance for those working at higher altitudes.

In true Takeuchi style, the TB260 does not disappoint when it comes to hydraulic precision and performance. It is to be expected from the Japanese brand and while it will be difficult for the firm to improve upon, you’d soon notice any deterioration in controllability.

There is a generous amount of stability considering the working envelope available from this new six-tonner. After tidying up the site to level and site the TB260, I had a chance to show off its full reach while loading a tracked dumper.

Our test model carried a quick hitch too, and while it didn’t seem to take anything away from the six-tonner’s ability, we didn’t opt to swap to the ditching bucket. The mix of rubble-filled ground we were working on dictated a more aggressive approach, and it did put those bucket teeth to the test.

Although the wider bucket would have made shorter work of loading the dumper, the toothed item made much more use of the TB’s performance.

More than once did I have to anchor the TB260 using the blade, proving there is plenty of tug at the bucket.

Other than some tightly constrained service intervals that appear to leave Takeuchi wallowing in the past when it comes to running costs, there is little to fault with the TB260. It proved so smooth and easy to use, that the old adage of ‘if it looks right, it probably is right’ couldn’t be more appropriate.

Downsides are few, but the indications suggest the TB260 is so competitively priced that there is a good chance the popularity of the smaller and lighter TB250 could start to slide. 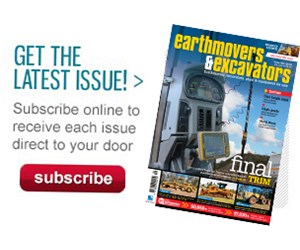 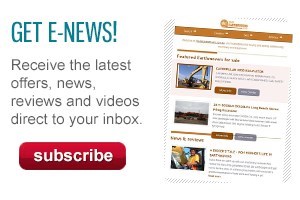 The Caterpillar D10N bulldozer is a beast of a machine, and one that Ron Horner has a lot of affe...